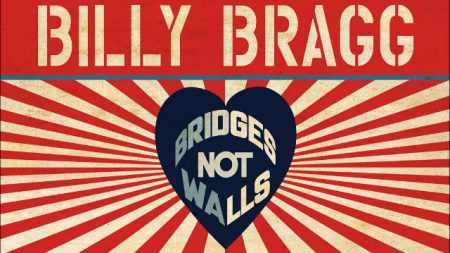 Bonn musician Sebastian Landwehr will participate this Sunday in the monthly Pulse of Europe rally in front of the Old City Hall to raise his voice for a peaceful and united Europe in unison with thousands of people across Europe.

The singer-songwriter, who released his debut album “Der rote Faden” a few months ago, will perform three of his songs in German, including “Der Orkan”.

Landwehr will also present a new English version of the “Ode to Joy”, written by the British folk singer and punk rock legend Billy Bragg.   Beethoven’s Ode was adopted as the anthem of Europe in 1972. The United Kingdom joined the EU (or European Economic Community as it then was) in January 1973.

This will be the Germany premiere of Bragg’s cheerful re-imagined “Ode to Joy” . It was first performed in June 2007 in London at the re-opening of the Royal Festival Hall. Everyone is welcome to join and sing along. (See lyrics below)

The aim of the one-hour Pulse of Europe event (2-3 pm) is to make the European idea visible and audible again and to stand up against hate and right-wing populism. Pulse of Europe started 2016 in Frankfurt as a small grassroots initiative. Today the pro-European civic movement has branches in more than 130 cities in 20 European countries, attracting thousands of citizens to city squares on Sundays.

Bragg, for his part, will be this Sunday at the Manchester International Festival for the kick-off concert of his new solo tour, titled ‘Bridges Not Walls’. Bragg is an outspoken Brexit and Trump critic and has railed against xenophobic attitudes since 1978, when he joined the Rock Against Racism movement.

Galvanised by the recent ‘events’, not least the worrying rise of popularism, Billy Bragg is dealing with it in the best way he knows how, by strapping on his electric guitar and heading out on tour across the United States, Canada and Europe.

“Music can’t change the world, but it does have the power to bring people together”, says Bragg, ahead of his ‘Bridges Not Walls’ tour. “In such divisive times, it seems a good place to start”.

His tour will end in late November in Germany with concerts in four cities, including in Cologne where he will play on November 27 at the Gloria Theater.

In the documentary film “Following the Ninth” , Bragg explained how his new Ode version, which gave occasion to an anti-monarchist rocker’s unlikely meeting with the queen, came about.

Ten years ago, a performance of Beethoven’s Ninth symphony had been planned for the re-opening of the Royal Festival Hall and a chorus of schoolchildren was intended to lend the festivities an irresistible touch. But the children gagged over Friedrich Schiller’s grandiloquent language. So Bragg was asked to write an easier, modernized version for them.

He was invited with his family for a Royal Gala to see the full orchestral performance of Beethoven’s exhilarating symphony performed with his updated lyrics, and sung by 1500 choristers from across England. Afterwards Bragg met with Queen Elizabeth II.

“I got to shake hands with the woman who gave the World Cup to Bobby Moore. For a boy from Barking, it just doesn’t get much better than that. What can I say? The Queen charmed the pants off me,” he wrote in a Daily Mail article.

From the rubble of the war

Peace and freedom ever more.

Raise your voices now as one

Though by history divided,

Throw off now the chains of ancient

Hand in hand let’s walk together

On the the path of liberty

Hark! A new dawn is breaking

Raise your voices now as one.

Though by history divided,

What’s to be then, oh my brothers?

Sisters, what is in your hearts?

Tell me now the hopes you harbour

What’s the task and where to start?

Every word is understood:

Furnish every heart with joy

And banish all hatred for good.