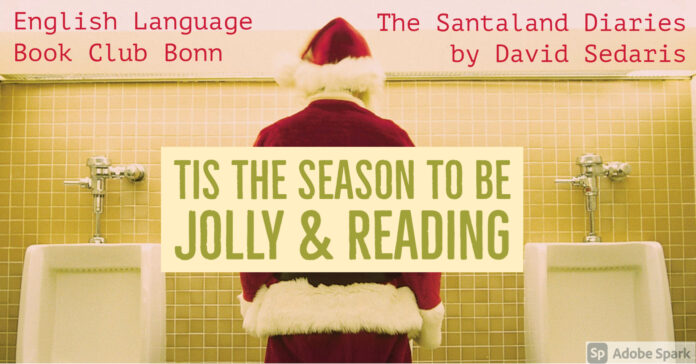 “I know not all that may be coming, but be it what it will, I’ll go to it laughing.”― Herman Melville

Looking for a cheerful read and good company to lift your spirit while maintaining social distancing? This will be a holiday season like no others. The English Language Book Club Bonn of the Tannenbusch House Community invites you to read books together and discuss them in monthly virtual meetings while being apart.

The December pick is Santaland Diaries by David Sedaris, an US-American author, comedian, and radio contributor. It’s a collection of six profoundly funny Christmas stories by the bestselling author whose books have been translated into 25 languages.

The essay Santaland Daries is his hilarious account of two Christmas seasons he spend working as an elf at the Macy’s department store in New York. The author made his comic début on National Public Radio’s Morning Edition in 1992, reading Santaland Diaries. Since then, hearing Sedaris as Crumpet the Elf has become an American holiday classic. You can listen to the story in the animated video below and learn about how “Santaland Diaries” made its way on NPR from a 2017 conversation with Sedaris and This American Life producer Ira Glass.

We will discuss the book online on Sunday, December 20th, 6 – 8 PM. This is the link to the meeting: https://meet.jit.si/BookClubMeetingDecember For further information, please visit the book club’s Public Facebook Group.

In his most recent book, The Best of Me, published in November, the now 63-year old author has picked his best essays from nearly 30 years of work. A Sedaris story may seem confessional, but is also highly attuned to the world outside. It opens our eyes to what is at absurd and moving about our daily existence.

“ If you’re looking for some comic relief, look no further than David Sedaris”— NPR